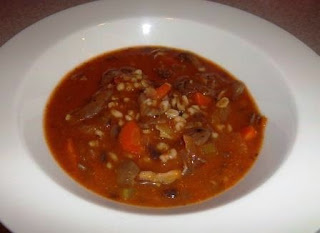 With all the rain we’ve been getting lately in NC (sorry West Coast!), it seems like an excellent time to feature another of Cooper's Super Soups...Four Mushroom Barley. This one goes great with a grilled cheese sandwich on the side, though it's certainly hearty enough to stand on its own. However you want to do it, it's mmm mmm great. This soup got the Two Thumbs Up from Dad.

Place porcinis in 1 cup of boiling water, cover and set aside for 20-30 minutes. Once rehydrated, drain the porcinis, but reserve the water. Once the mushrooms are cool, chop them up.

Throw in mixed mushrooms and cook about 10 minutes or until softened and reduced.

While stirring the mushrooms, add the sherry and let cook for a minute or two so the mushrooms can soak up the flavor. To intensify the flavor, allow the liquid to reduce a bit.

Mix in barley, bay leaves, marjoram, and dill then cook for another 5-10 minutes.

Add the reserved water from the porcinis, the mushroom broth, and crushed tomatoes. Let simmer covered for about 50 minutes, or until barley reaches desired level of cooking.

Season with salt and pepper to taste.

Lessons I learned from my first attempt making this soup:

3 quarts of water
All the trimmings from the sweet potato, parsnip, turnip, carrots, and celery root (remove the stems from the celery root, but add a few leaves back in, maybe 4-5).
1 onion, quartered
4 portobello stems
Stems from 8 oz of shiitake
Gills from 2-4 portobellos
2 jalapenos, cut in half

Toss all ingredients in a stock pot and simmer for an hour.

Strain and set aside for later. As an aside, when I made this stock it was for another soup. I almost stopped at just the stock because it was so tasty!

This stock is incredibly flavorful, so it will overpower mild flavors (such as the dill that was added), but it really highlights the mushroomy flavor and adds a bit of heat that keeps everyone wondering where the peppers are. 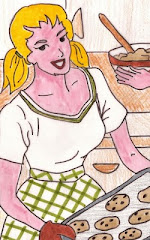